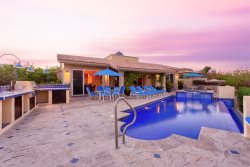 THE ROCK FORMATIONS OF LOS CABOS

When you picture Los Cabos, whether you’ve actually been there or just looked at photos, what do you see? The rock formations sticking out of the sea at the tip of the Baja California Peninsula probably come to mind. The area where these rocks formed is known as Land’s End, where the Pacific Ocean meets the Sea of Cortez. If you followed a line south from this spot, you would not touch land again until you reached the South Pole. Hence the name, Land’s End. It is a popular tourist attraction and a must-see spot when you visit Los Cabos.

THE ARCH
Known as “El Arco” or The Arch, this 200-foot granite rock formation sticking up out of the water at Land’s End is the distinctive landmark of Cabo San Lucas. The spectacular natural shape was carved by the strong ocean currents. It’s definitely a sight worth seeing! In October, the sea level falls low enough that visitors can walk under the arch all the way to the beach. Its also the only place in the world where you can see both the Sea of Cortez and the Pacific Ocean at the same time. The area is perfect for adventurers and backpackers, and is the central focus of countless vacation photos! Check out amazing Cabo San Lucas Travel Videos.

PELICAN ROCK
One notable granite pinnacle protruding from the water on the northeast side of the cape is known as Roca Pelicanos (Pelican Rock). You probably guessed from the name that you’re almost sure to see a pelican when you visit there. Coral polyps on the underside of the rock create oxygen, making the area a nutrient-rich environment. This draws an abundance of marine life including king angelfish, pufferfish, parrotfish, surgeon fish, guitarfish, sea fans, sea urchins, beautiful coral formations and more! As a result of the marine life and proximity to nearby sandfalls, Pelican Rock is one of the best dive sites in the bay.

NEPTUNE’S FINGER
There is slender rock protruding out of the water near Lover’s Beach that looks a lot like a slightly bent finger rising up from the deep blue sea. Local boaters and tour guides generally refer to this rock as Neptune’s Finger. This area also offers a great place for diving, as you will find corals, sponges and sea fans.

THE LOOKOUT
The mass of rock offering the most distant view of the horizon, known as Cerro Del Vigia (The Lookout), was once used as a vantage point from which to spot approaching ships. By being able to observe sails in the distance from this rock, the pirate crews had enough time to prepare their attack.

THE SCOOBY DOO ROCK
One of the most entertaining of rocks is the Scooby Doo Rock, located to the southwest of the Arch. Upon close inspection, you can make out the ears and snout of this famous cartoon dog. Others note that the same rock looks like a witch.

THE FRIARS
Known popularly as Los Frailes (The Friars), two huge rock islets lie just offshore. They look like hooded monks and are known to be another favorite place among Sea Lions.

THE ROOKERY
The large flat rock hosting a colony of sea lions is known as La Lobera (The Rookery). Behind it is a small pinnacle upon which you’ll most definitely see a single sea lion, posed as if it were on the prow of a ship. The pinnacle is known as The Point, and is a premier dive site at Land’s End. The area offers up-close looks at sea turtles, sea lions, moray eels, whale sharks and even the occasional octopus.

When you visit Los Cabos, be sure to take a water taxi out to Land’s End to view these spectacular rock formations. Take beautiful pictures from the water or pack a picnic lunch and take in the view while eating on the beach. When you choose to stay with Lifestyle Villas, we’ll hook you up with the best excursion packages. From snorkeling to scuba diving, there are a variety of ways you can enjoy the beauty of Land’s End. We give the best things to do in Cabo San Lucas for your next vacation trip. Talk to one of our Lifestyle specialists today about adding a trip to Land’s End to your itinerary!