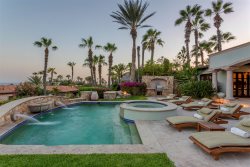 Whale watching season in Los Cabos is underway! From December to April each year, hundreds of whales from the frigid waters of the Arctic migrate to the warm, calm waters surrounding the Baja Peninsula. During this time of the year, there’s no better place to go whale watching than our sun-soaked paradise! Often you can even view them from your ocean view luxury villa rental in Los Cabos.

WHALE WATCHING IN LOS CABOS
Los Cabos sits at the tip of the Baja Peninsula, separating the Sea of Cortez from the Pacific Ocean. While the Pacific Ocean acts as a highway for whales to travel between their home in Mexico and their feeding grounds in Alaska, the Sea of Cortez is a whale sanctuary. The intersecting areas of these two bodies of water create an oceanic super junction that allows for a unique whale watching experience.

POPULAR WHALE SPECIES
The Sea of Cortez is still one of the most biologically intact seas in the world. Whales of many different species spend time here, most notably the population of Humpback and Gray whales, which explodes from December to April. However, approximately 75% of all whale and dolphin species can be found in the Sea of Cortez. While the “whale watching season” runs from December to April each year, whales, dolphins and other marine life can be found all throughout the year.

HUMPBACK WHALES
Humpback whales are known for their magical songs – these sequences of moans, howls, cries and other noises are quite complex and can continue for hours on end. They are often found near coastlines, feeding on tiny shrimp-like krill, plankton and small fish. Mothers and their young swim close together, often touching their flippers in a show of affection. They are powerful swimmers and they use their massive tail fin, called a fluke, to propel themselves through the water and sometimes completely out of it. Humpback whales, like others, regularly leap from the water, landing with a tremendous splash. Scientists are unsure if this behavior serves a purpose or just for fun!

GRAY WHALES
Gray whales are often covered with parasites and other organisms that make their snouts and backs look like a crusty ocean rock. The gray whale is one of the animal kingdom’s great migrators, traveling in groups called pods. Some gray whales will swim up to 12,340 miles round-trip from their summer home in Alaska to the warmer waters off the Mexican coast. Like all whales, gray whales surface to breathe, so migrating groups are often spotted from North America’s west coast. These whales were once the target of extensive hunting and by the early 20th century they were in serious danger of extinction. Today they are protected by international law and their numbers have grown.

ADD WHALE WATCHING TO YOUR ITINERARY
When booking activities, such as whale watching, through Lifestyle Villas, you can rest assured that you’ll have a safe and enjoyable time! We always recommend booking activities for at least 72 hours in advance to ensure availability. Talk to one of our specialists today to start planning which activities you want to add to your itinerary during your vacation in Los Cabos by calling 1-888-655-9589!